Delivered this week, a donation from Forbo. Marmoleum to make art with.

This is heavy stuff, each roll is 50 to 70 kgs. Ouch. The rolls are 2 metres wide and lengths vary from 6 to 9 metres. Larger works are possible.

Landscape has been a central theme in my work for a long time. This has taken on several forms of enquiry from creating physical spaces that an audience can physically participate in, to questioning the nature of materials, their origin, their authenticity and referencing to the ‘natural world’.

Any representation of landscape, landform, environment, etc. is going to be an artifice but often we don’t ‘see’ this. we seem to believe what we are looking at. (looking and seeing, a good skill)

What I have been doing with the Marmoleum is several fold. I like its own inherent ‘green’ credentials, but mostly I like its referencing ‘natural’ form, colour and textures. The material is flat, thin and strong. It is integrally coloured, such that the cut face is still the colour of the surface. Consequently in the construction of the contoured, topographical works the layers of colour are solid colour.

The work so far is raw and experimental. The large rolls now offer me the opportunity to increase the scale. The language of the work is from mapping and again, obviously, a representation and understanding of landscape. Whether the landscapes are ‘real’ or imagined nirvanas or just plays of colour and shapes will be your call. 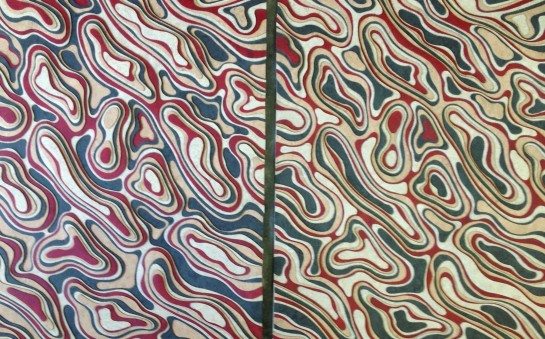 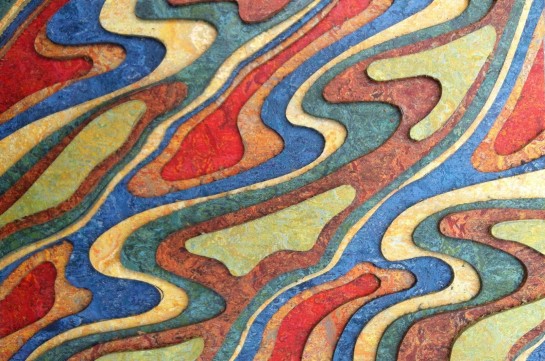 Natural flow: Mark Stoner at his installation The River Runs through It, which spreads from the western tip of Collins Street to the Docklands water’s edge. Photo: Jason South

THERE isn’t another living soul in Westgate Memorial Park but it feels almost unbearably crowded. In the cold shadow of the bridge stand 35 concrete columns in a long line, each signifying a man lost in the construction disaster of 1970. From way down here in this otherwise forgotten space, these sculptures give life to the cold, functional structure hundreds of metres above.

Ten minutes east, on the city side of the Yarra, is a much more sunny and open scene. Docklands office workers eat lunch in landscaped gardens among a dozen or more white, shell-like sculptures rising shoulder-high from the ground. Small kids climb raised brick mounds, rippled and undulating like fossilised dunes.

The River Runs through It is the name of the vast installation that sprawls from a new roundabout at the western tip of Collins Street to the artificially defined water’s edge. The paving is cut with wiggly lines that reach like tide marks right inside the cafes encircling the monolithic ANZ building.

The sail-like sculptures of North in Geelong

The artist responsible for both these acts of petrified memory is Mark Stoner. He runs a hand over one of the shells, this one sharply divided to allow an interruption of the pedestrian walkway, and wonders if the black marks on the smooth surface are from BMX riders. Even now, the past continues to accumulate.

”You can actually walk in the marshy stuff over there,” he says, pointing across the river to new buildings on South Wharf Drive, ”and see where the mangroves are still trying to survive among the old broken blue bottles and all manner of stuff. That’s part of our history as well, I suppose.

”The point is that there was an original habitat here. I’ve tried to suggest that there is an underlying flow, so there’s organic form cutting into the rigid form of the development, which I’ve tried to push right up and into the building.”

Stoner’s first piece of public art was unveiled at Queen Victoria Market in 1998. That, too, had its conceptual roots in what lies beneath the veneer of urban memory. ”At various stages they moved sections of the original Melbourne cemetery from the market site to different parts of the city,” he explains. ”When Telecom went to work they would often dig up bones, which would greatly upset some of the stall-holders. We needed to make some admission of history, so I won a commission to make a commemorative piece.”

In truth, such wins belong to all of us. Sue Clarke, one of Stoner’s former colleagues at the Victorian College of the Arts, is an arts consultant to the Docklands site’s owner, Lend Lease. Like all urban developers, it is obliged by state planning regulations to invest a percentage of its budget in public art projects. ”I think Melbourne has always seen that art can help define a place, can signify a time or an event that you might want to remember,” she says. She cites the repositioning of traditional commemorative sculptures such as Charles Summers’ Burke and Wills statue and the more whimsical likes of Pamela Irving’s Larry the dog on the same City Square site.

”Then there is art as public space, which is less object-oriented and perhaps encourages you to walk the site and to remember what it was,” she says. ”Part of working with art as public space is to really understand the urban design interactions. That’s where Mark’s work comes in.” For the Docklands site, Stoner was put on a shortlist of artists invited to present models, drawings and presentations on their visions.

”There was no doubt about Mark’s interest in bringing up through the ground the history of the site,” Clarke says. ”It has an Aboriginal history and an ecological/environmental happening he was keen to make evident. He also reminds us that the Yarra River had actually been rerouted back in time. All of those elements were manifested through the work.”

Stoner’s own history began on the northern beaches of Sydney, where he claims he ”never saw any public art – probably never saw any art at all”. He was drawn to Melbourne in the mid-’70s by a teaching course specialising in art at the then Melbourne State College. He ended up teaching at VCA for the best part of 25 years.

In 2000, his first major public commission was North, an exhilarating race of sail-like sculptures on the Geelong waterfront.

His subsequent concerted push into the public domain was largely in response to a profound private trauma. His wife lost a long fight with cancer two years ago.

”Part of this whole past decade of me working in a public space was finding somewhere to work while we were having this terrible family crisis,” he says. ”Somehow, working in the public space, I could work externally to myself.

”For me, that was a survival tactic in some senses.”

From under the West Gate to the mangrove end of Collins Street, much more survives as a result, even if the artist’s name remains ironically obscure. ”It may be just part of my character,” he says with a smile. ”The public space is an odd kind of limbo for an artist. Really, for me, it’s about seeing people transit through the space, experience the space. I suppose I feel good about that, egotistically, but mainly I would just like people to be happy about being here.”

I was on the site of ‘the river runs through it’ in Victoria Harbour this week. The installation is looking good and seems to have become nicely embedded into the site. The intersection of Collins and Merchant Streets is a full on building site. 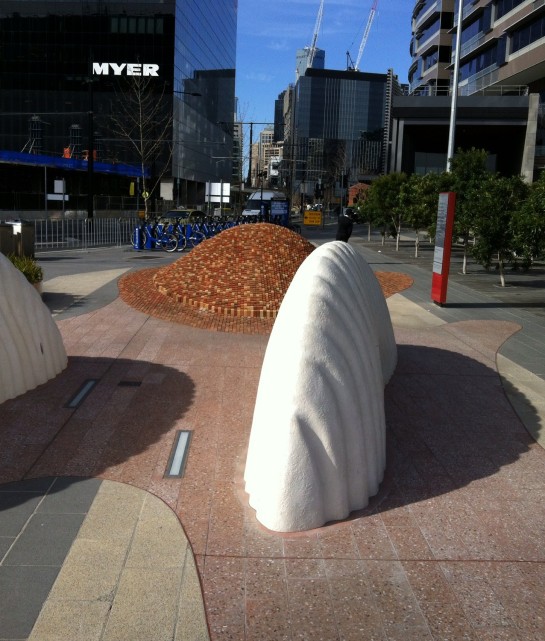